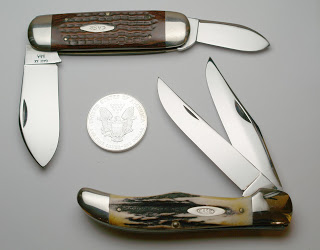 Historically from a collector’s perspective, big pocket knives have ruled.     They command much higher premiums than small knives, and I got to wondering why this was the case.  After all, small knives take as much if not more labor, and the price of materials can only vary by a small amount between a big knife and a little one.

Here are my conclusions as to why big knives rule the day:

As I thought through these things, it all made pretty good sense.  If you don’t have actual quantities with which to determine rarity and value, this is probably as good a method as any to estimate it.
But then I got to thinking:  using the original price as a method to estimate rarity might be exactly right when the knives were made, but are they still accurate predictors of rarity today?  I first thought about this with the W. R. Case & Sons delrin handled knives that began to appear in the late 1960’s and early 1970’s.  Unannounced, the company started replacing the traditional bone handles with synthetic delrin.  Delrin after all, was much more durable than bone. Everyone should like that, shouldn’t they? (Remember at this time, that formal knife collecting was in its formative years.  Case was still making knives to use not necessarily to collect).  BUT, collectors and dealers did not take to delrin.  It was flat, it faded, it lacked the depth and beauty of bone.  The result was that few collectors put back delrin handled knives and most of those made went into pockets and were used.  If most of these knives were used, then a nice unsharpened delrin knife would be a rare thing today, wouldn’t it?  It still might not be heavily collected or pricey, but it might be very rare nevertheless.  It pleased the BladeMaster when a number of these early delrins began to escalate in price, in some cases, fetching more than $100.

This then led me down this trail.  In the early years (at least prior to the early 1970’s), knives were to use—period.  (Of course, there were a few far sighted collectors ahead of the curve that put knives up, but I am speaking generally).  And how were pocket knives used?  They were carried in the pocket, of course.  But big knives are much too heavy for most to carry in a pocket every day.  These knives came out of storage during hunting or fishing season, went into the pocket until the limit was filled, and then went back into storage for another year.

The small knives were put into a pocket and used as a carrying knife every day.  They were used, sharpened, then used again, until they broke or became like needles and were thrown away.  It is also much easier to lose a small knife.  Meanwhile the folding hunter remained in storage, waiting for the next hunt.

If this is a correct analysis, there was an increasing chance that the small knives, no doubt much more common originally, might be increasingly rare when compared to the big knives.  Saying this simply, did the small knives get scarcer because more were used up?

The BladeMaster decided to try and figure this out.  For four months, I counted 6 small Case knife variations and 6 large knives.  This was done by searching the completed listings in Ebay once a month.  During this 4 month period approximately 20,000 Case knives were sold on Ebay.  I only counted knives made before 1970, because I wanted the knives to be old enough to be used up.  I also searched on the following handle codes for each pattern: 2 for black composition, 3 for yellow composition, 5 for stag, 6 for bone, 8 for pearl, and 9 for cracked ice or imitation pearl.  In other words, when I looked at the Case peanuts, I searched for 2220, 3220, 5220 and so on.

Table 1  Occurrence of Small Case Knives made before 1970

Table 2 Occurrence of Large Case Knives made before 1970

As you can see, there were 80% more of the large knives listed than small knives. This is at  least some evidence supporting the theory that old small knives may be scarcer today than the large ones.   The BladeMaster is very comfortable stating this conclusion as a fact:   there are more old large knives sold on ebay than there are smaller knives.

Introducing a New and Improved KnifeDB!

Welcome to the new KnifeDB.com!