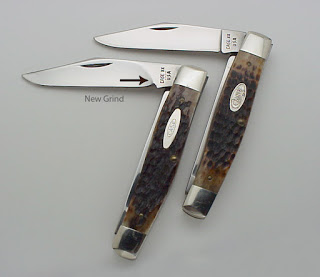 Looking back we can identify knives that have become highly collectible.  Most frequently, our guide is price.  Sadly, by the time the price tells us that a knife has become highly desirable, most of us can no longer afford it.

With hindsight, its easy to say that we should have laid up a basement full of Case Tested Trappers, or long pull stag congress knives.  But we didn’t and now for most of us it’s too late.  So, is it possible to identify modern (and therefore cheaper) Case XX knife production that might hold the possibility of good financial gain down the road? Indeed, there are clumps of reasonably priced modern knives that show early increases in price at a rate greater than their peers.

This article is about “new grind” knives, one of these batches.   For the Case factory, this was a noble experiment that failed.   New grind knives were only officially made in 1983, 1984 and 1985 by Case.  Case called these “shoulder-less grind” knives but this doesn’t roll off the tongue like the more commonly used “new grind” does.

The “New Grind” (bottom) and the traditional straight grind.

(For new collectors–the new grind is a curving arch on a blade replacing the typical straight ground tang).

The first “official” mention by the Case factory of the new grind appeared in the September 1983 Case Collector’s Club Newsletter.  First, the article introduced these knives, then Case said that the Engineering Department felt that the process of creating the shoulder in the old straight grind weakened the blade like “a glass cutter does to glass”, and the new grind was 70% stronger.  Further, “Conversion has already occurred on all blades having a polished finish.”

Therefore, as of September 1, 1983, Case said that every polished blade would have the new grind. Case also reported that an initial test run of  70,600 knives was already completed. (See Table 1).

The same newsletter introduced the Pro-Lock and Dura-Lock pattern knives.  These new pattern knives were each made with the new grind in 4 size variations.

“The new 1983 patterns made with the new grind.  The two small ones are Dura-Locks, and the two large ones are Pro-Locks.  Both the Dura-Locks and Pro-Locks were made in all four sizes seen. Like the new grind, they wouldn’t survive.

So, Case proudly introduced the new knives and even produced 8 new (but similar) pattern variations featuring the new grind.  The concept of a 70% stronger blade seemed right on the money.  These blades are quite beautiful and distinctive.  What went wrong?  Why would the new grind be gone before two more years pass?

The first subtle hint of problems may have appeared in the same September 1983 newsletter that introduced the knives.  This newsletter says that Case was doing a test run of satin or machine finish knife blades but that this process needed more testing and modifications.  In the meantime, all satin finish blades would have a straight grind. It is also interesting that Case referred to the manufacture of the 70,600 knives in table 1 as a “test run”, which seems an expensive trial balloon.

Then, the April 1984, Case Collector Club newsletter offered a “Shoulderless Grind Update”.  It said that the changeover continued on polished blades (we were told the previous September that it was done) and the satin blades will have a straight grind until further tests are done.  Seven months after the first mention of the new grind, the factory was still testing the satin or machine finished blades.

Next, the August 1984 Case Collector’s Club Newsletter indicated that Case wasintroducing six new standard line stag patterns in 1984.  These are the same 6 knives introduced earlier in the 1984 catalog.  Quoting from the newsletter, “A special note to collectors is the first 1,000 units of each of the patterns (except 5318 SH SP SS), has been produced with polished blades and a square cut shoulder.  All patterns after the initial 1,000 will have polished shoulderless grind blades.  They will be available at Case dealers in October.”
Clearly the problems continued for the factory.  Reviewing, Case issued a 1984 catalog that promised six new grind stag knives, but in August, 1984 announced it was making 1000 straight grind stags first.  Further, neither of the straight or new grind stags would be available until October 1984, months after the catalog promised them.  All this leads to the conclusion that there were substantial manufacturing problems with these blades.  The problem may have been with consistency, which led to increased costs. See figure 3.
Difficulties in manufacture and consistency may have doomed the new grind.  Note the differences in the new grind in 2 1984 33 pattern knives.
In any event, the new grind blades never really got off the ground and were relegated to Case history within less than two years after the initial announcement, creating this wonderful area for collectors.
Table 2 is an inventory of the standard production knives that the BladeMaster has seen so far.  Missing year dates may still be out there, but the BladeMaster hasn’t seen them yet.  When you are searching for variations in knives, it is impossible to know when you are done…
Table 2-Standard Production New Grind Knives by Pattern
Notes on this table.  Case Abbreviations: SH = Sheepfoot blade, SP = Spey blade, ½ = clip blade,  SS = Stainless Steel, SSP = Stainless Steel with a polished edge.  Brown jigged delrin is not actually jigged, but molded to resemble jigging.  Satin finish is also frequently called brushed finish or even machine finished.

You can find much more information on any of the knives above athttps://www.knifedb.com/knives/search

On the SS stamps note the spacing after the E and the position of the first dot.

1985 Date Tangs used on new grind knives.
What conclusions can we draw for collectors at this point?   Mostly polished blade CASE XX pocket knives were made for a third of 1983, all of 1984, and a third of 1985.  Blades with satin finished blades were spottily made during this time.

1.      Look for unusual tang dates.  We have seen 2 new grind knife variations with1981 date tangs (special knives in the next article) and one small stockman with a 1986 date.  These have to be very unusual collectables, and may well prove worth an investment.

2.      Look for new grind and straight grind tangs in the same pocket knife. All of the 6308 and 5308’s found so far have a straight ground master, and new grind smaller blades.  A 6347½ has been found with two new grind blades as well as three new grind blades.  These and perhaps other unusual combinations may be out there.
3.      Look for the  1983 and 1985 variations.  It is clear that Case was getting out of the new grind business early in 1985, and announced new grind production late in 1983.  These have to be rarer because the time of production was limited.  It is the Blademaster’s feelings that the 1985’s are rarer than the 1983’s, but other than looking at a lot of knives has no further proof of this assertion.
4.       Look for the unique Dura-Lock and Pro-Lock patterns.  Every new grind knife seen with a pull, has a regular pull:  There are no long pulls on new grind knives. These knives have satin finish blades which were problems to make.   The Dura Lock and Pro-Lock series do not have any pulls on the satin blades–adding to their uniqueness.  In addition, it is very rare, if not unique to find a Case pattern made for such a short time.  Yet the Dura-Lock and Pro-Lock knives fit within this unique group (with the exception of the Pro Lock III and IV which have been found with both 1983 and 1984 tang dates.    Imagine if the 6254 was made for only one year, and no other handles, shields, blade combinations or tang dates are created with the trapper shape.  Then you can begin to see why these eight locking knife patterns are extraordinarily unusual.  Further, we can assume that these knives did not sell well, (if they did, Case would still be making them), which means that they have to be considered rarer than most knives.  Of course, these patterns were lower end knives, with four patterns having synthetic handles, and four with wooden handles.  Both these handle materials tend to be discounted by collectors.  We continue to believe however, that these knives will present an economical long term investment opportunity.  These knives can be picked up in the $30 -50 dollar range today.  Remember it is much easier for a $30 knife to become a $120 knife than it is for a $5,000 knife to become a $20,000 knife. Yet each of these is the same return on investment.
5.  Look for satin finish new grinds.  Because it is very clear that Case had most of the manufacturing problems with satin finished blades, it seems logical to conclude that there are not as many variations of these seen, and those that are seen may be very limited in number.
There are many collecting opportunities in the new grind knives, no matter if you collect by handle, pattern, blade material, or date.   Time will prove their uniqueness and rarity.   But we have only told part of the story of the new grind knives.  In the next Blog we will discuss the knives not made as standard production.  The next article will describe the commemoratives, club knives, and sets.   If the regular production new grinds are rare, these knives all were produced in even rarer quantities.

Introducing a New and Improved KnifeDB!

Welcome to the new KnifeDB.com!